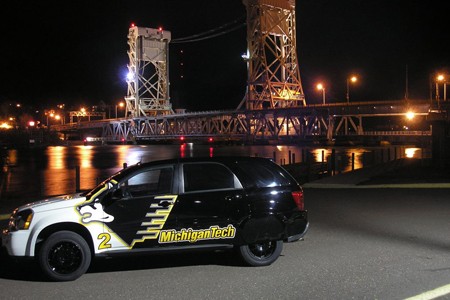 Mechanical engineering students working as part of the Michigan Technological University’s Challenge X Team were plagued by broken half shafts in the electric drivetrain of their Chevrolet Equinox hybrid vehicle. A resonant torque event was causing the failures that were occuring even at low speeds on tractive ground.

The Challenge X Team employed Micro-Measurements strain gages and Binsfeld telemetry to conduct real-time analysis on the rear drive shafts. During tests where the vehicle was allowed to coast down from 20 mph to a stop, harsh vibration was experienced and presented in the torque data as an oscillation with a frequency of 7.1 Hz. This data matched the natural frequency predicted by a two-mode model of the drivetrain simulating backlash between the axle and the differential. This backlash caused instability in the closed loop regenerative torque control, creating a resonant torque event exceeding the ultimate strength of the half shafts. Programming changes in the control logic to account for the backlash would eliminate the failures.

The Challenge X competition, sponsored by GM and the Department of Energy, was initiated to foster the development of fuel efficient technologies to minimize energy consumption and environmental impact of light-duty passenger vehicles.